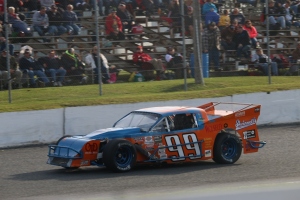 PETERBOROUGH, Ontario — Staying out of trouble throughout the whole feature and running up near the front, A.J. Emms would complete his Hoosier OSCAAR Modified rookie season with a fourth place finish at the Autumn Colours Classic.

Emms started off the weekend by finishing second in his heat on Friday, followed by a sixth in his heat on Saturday. As a result, that would set him up to start eighth for the 50-lap feature on Sunday night.

Emms would manage to escape the early wreck that happened involving multiple cars, keeping himself set for a strong run in the feature. He’d fall back in the early laps, though, but was able to work his way back up to 11th on lap 10. He would continue to un 11th all the way till an incident happened up ahead involving the race leader and a lap car, bumping Emms up to the eighth spot.

Emms would get a good solid restart and escaped an incident up ahead of him to move up to sixth with 11 laps to go. He then avoided the contact that happened the rest of the feature, while battling hard, to cross the finish line with a fourth place finish.

“After learning a ton, and having a good season, huge thanks goes out to Allen Adams for letting me pilot the #99 Oscaar Mod, it was definitely a privilege I won’t forget,” Emms commented following the Classic. “Big thanks to all of our sponsors and crew for all of their support, without you this season wouldn’t have been possible. Looking forward to some new challenges in the 2016 racing season in a different ride.”