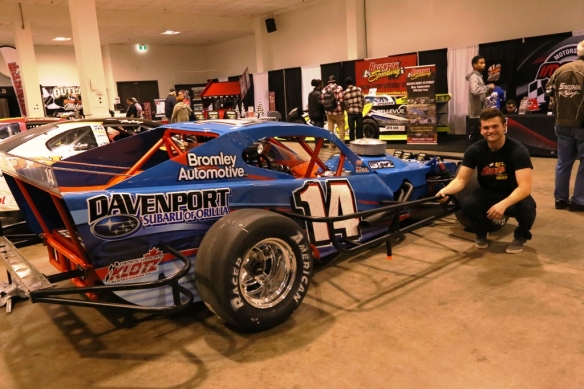 TORONTO —- At the Motorama Custom Car and Motorsports Show, A.J. Emms unveiled the brand new look that he will carry for the new season.

Sporting the No. 14, the blue and orange captured the fan’s attention throughout the weekend as they stopped by check out the car, and pick up a copy of the OSCAAR schedule.

The enthusiasm from the fans is shared by Emms, as he expressed excitement about the upcoming year.

“I mean, my family has really come behind me,” Emms commented. “Everybody has really stepped in just giving me a hand and we have a lot of great sponsors that have come on board for this season – Davenport Subaru, Sunshine Super Wash, Creecher’s Design, Klotz Canada, TSS Top Shops, Bromley Automotive. There’s been a lot of people that have been on board and makes me excited for this season.

“With this new car and the way it is looking right now, it’s just makes me ecstatic.”

Last year, Emms had a successful rookie campaign in the series, scoring four top-fives and seven top-10s en route to finishing sixth in the season-ending standings. The season was highlighted by a career-best third at Delaware Speedway in September.

All the drivers will have 10 races to qualify for the championship battle, with the qualification period ending on August 19 at Delaware Speedway. The top eight drivers whom have competed in 90% of the series events, or the top seven drivers plus the Chase for the Colours winner, will be eligible for the Race for the Cup. Notably, points will be reset equally for the eight drivers prior to each round during the format.

The final three drivers will be set for the championship showdown at Peterborough Speedway on October 9, with guaranteed starting spots of fourth, fifth and sixth in the feature; the order they start will be set by heat points. The top finisher of those three will be declared the 2016 OSCAAR Modified Champion.

Last year, Emms had a successful rookie campaign in the series, scoring four top-fives and seven top-10s en route to finishing sixth in the season-ending standings. The season was highlighted by a career-best third at Delaware Speedway in September.

Obviously, the goal this year is to break through for the first victory, but Emms says it’s tough call as to say where and when that could happen.

“With never having this race car on the track, it’s one of those things where you have no idea,” he expressed. “With this car, I may not even able to win. It’s a beautiful piece, so we’ll see what we can do with it. 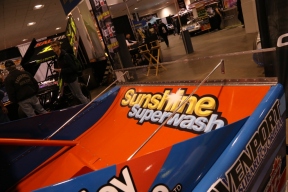