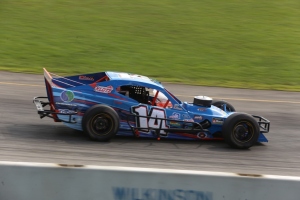 AJ Emms was set for another strong performance at Peterborough Speedway this past weekend, when a late-race incident relegated him to a eighth-place finish.

Emms started off the night strong, finishing third and second in his pair of qualifying heats.

Come feature time, he worked his way up into contention for a podium finish despite no power steering. In the closing laps, he battled back and forth with Mark Gordon for the runner-up position. The pair unfortunately made contact on the last lap, resulting in a spin. As a result, Emms would be scored in the eighth position.

With six top-fives this season, Emms currently sits third in the standings, just seven points behind Luke Gignac for the top spot.

Emms and company will be back in action at the next OSCAAR Modified event, which is scheduled for Sauble Speedway on August 19. Earlier this season, Emms posted a third-place finish at the beach.

Fans can keep up with A.J. Emms all year by visiting his website at http://www.ajemms.com.