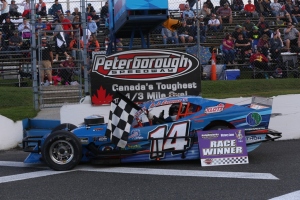 After a pair of back-to-back seasons coming up just shy on the OSCAAR Modified Championship, A.J. Emms confirmed his team will be back once again in 2018 with their sights set on the title. Emms also confirmed that BAE Environmental will be back as the primary sponsor on the No. 14 Modified.

“As a team we’re excited for what 2018 has to offer,” he said. “With the modified schedule released its hard not be to excited. With a variety of tracks on the schedule we look forward to battling with some of the best and bringing our best as a team each week. Along with this, we look forward to having the Peter (Schatanis) Built Limited Late Model out more often at a variety of tracks.”

The 2018 OSCAAR schedule will see Emms and company hit a series of tracks across the province, ranging from Sunset Speedway, to Kawartha Speedway, to Peterborough Speedway, Sauble Speedway and Flamboro Speedway. This year will also see the first trip for the OSCAAR Modifieds to recently re-opened Jukasa Motor Speedway.

“Without a doubt I look forward most to the race at the Jukasa Motor Speedway,” Emms said. “Having been a spectator at their inaugural race, I was very impressed with the facility and staff. The history of the facility also helps to build my excitement for the event hearing of stories from legendary racers competing at the Speedway.”

All of the events this year are expected to be action-packed, though, based on the talent level in returning drivers and new prospects as the division grows more with each passing year,

“I feel as though the modified division hosts some of the best teams and racing in the province, if not the country,” he said. “With a variety of drivers joining the series it only builds to this competition level. I am privileged to be apart of this group and am beyond excited to get back on the track in 2018.”

As noted, 2017 was filled with success as the driver of the No. 14 Modified scored six heat wins and eight feature top-five’s.

“Looking back on 2017, I feel that it was overall successful,” he said. “We learned a lot through the year and as a team persevered through a lot of bad luck. With that being said, we expect a lot out of ourselves and would love to click off more victories in 2018!”

The highlight of the year was mid-summer at Sauble Speedway, when Emms emerged for his second career OSCAAR victory, following up his triumph in the Autumn Colours Classic to round out the 2016 campaign.

“The most memorable moment of 2017 on track would have to be an action packed victory at Sauble Speedway,” he said. “I’m very fortunate to be surrounded by a great group of people that helped to formulate many off track memories throughout the season as well.”

Now looking to challenge for the championship, Emms says the key will getting more speed out of the car, so they score more checkered flags, while making sure they’re prepared the worst of situations and combat bad luck.

Fans are encouraged to stay tuned to the Emms Racing website at http://www.ajemms.com, as well as the team’s facebook page via https://www.facebook.com/ajemmsracing/ for details on 2018 when they’re released.