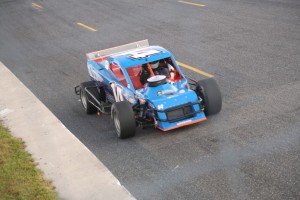 Emms started off the weekend by placing seventh in the first heat, followed by a runner-up in the second qualifier.

Starting 13th for the feature on Sunday, he would escape the first two incidents without any contact, allowing him to move up to 12th by the second caution at Lap 3. Restarting just outside of the top-10, he’d battle for 11th with Jeff Showler, taking the spot, remaining there until the next caution flew at the halfway mark. Restarting once again just outside of the top-10 with 26 laps to go, he would avoid a multi-car incident in turn four to move up into the top-10. Restarting ninth with 20 laps to go, he’d battle for eighth with Luke Gignac, but was unable to complete the pass, instead falling back to 10th. He’d remain there until the fifth caution at Lap 45, which he’d miss the spinning car to move up a spot to ninth. He’d battle hard through the final restarts to maintain the track position, finishing the race in ninth.

As previously announced, the next modified event for Emms Racing will be the Autumn Colours Classic, something that has Emms very ecstatic for based on his victory there two years ago and a runner-up at Peterborough in August.