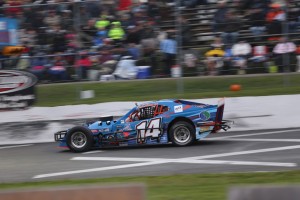 PETERBOROUGH, Ontario — Despite being involved in an early race incident, A.J. Emms made his way back to the front to score a top-five finish in the OSCAAR Modified Autumn Colours Classic feature at Peterborough Speedway.

Emms started off the weekend by finishing sixth in his Friday night heat, followed by a third in his Saturday qualifier.

Starting 15th in Sunday’s feature, he escaped the first lap incident without any damage to the No. 14 Modified. He then looked set to make his way forward, battling for positions mid-pack. Unfortunately, with just seven laps on the board, he made contact with the back of another competitor, sending that driver for a spin.

Sent to the back as an involved car for the restart, he would make his way back up to 14th by Lap 17, cracking the top-10 when he avoided an incident ahead of him on Lap 23. Restarting 10th with 28 scheduled laps to go, he’d avoid the next couple of incidents, moving his way up to the sixth spots. The outside groove proved tough on the restarts, as Emms slipped back to ninth. He would begin to make ground back up, passing Tim Tolton for eighth on Lap 28.

A couple more incidents for the leaders worked in his favor as he moved up to sixth. He then got by Chad Strawn on Lap 36 to move into the top-five. The caution would fly a lap later for a significant incident and due to hitting the time limit, single-file restarts would be the call for the rest of the event. Emms would battle hard on the ensuing restart, finishing the event in fifth.