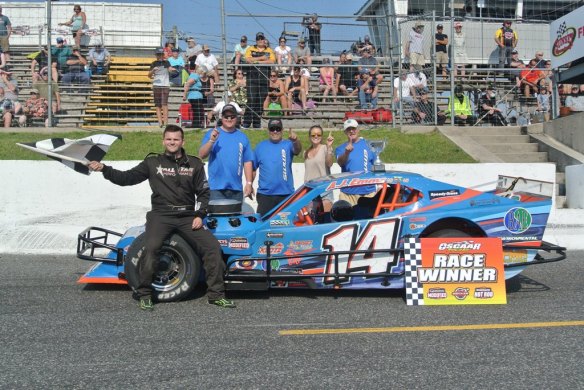 Despite some trying times throughout the course of the 2021 Queenston Chevrolet Buick GMC OSCAAR Modifieds presented by Just Foam It season, the consistency for Emms Racing led them to a solid top-five finish in the final standings.

“Overall with the year, I felt we had a roller coaster season with some really good highs like the first race at Sunset Speedway, and some pretty good lows with an accident also at Sunset Speedway in a heat race,” A.J. Emms commented. “That’s just a testament to a difficult year of racing. It really speaks to how racing can be such a humbling sport.

“I think we learned a lot this season although we struggled. We try to learn a little each year and hopefully we’re able to put some of that learning this off-season into use and try to find a little bit more speed.”

Ultimately, the year started off with the most memorable moment of the season in a whirlwind of a season opener. After getting married on Saturday, Emms elected to have Taylor Holdaway behind the wheel for qualifying at Sunset Speedway. Holdaway was able to get the job done, scoring a heat victory and runner-up.

Emms would get to the track prior to the start of the feature, getting behind the wheel of the modified – though having to start from the tail of the field due to the driver change. The climb to the front came quickly, though, as he put himself inside the top-five with 20 laps to go and was able to capitalize late to score the victory.

“He’s been a childhood friend of mine,” Emms spoke of Holdaway. “He’s a guy that I grew up a couple blocks from, we raced go-karts against each other, we go to Bristol, Tennessee each year together, and spent a lot of time together growing up racing, and it was really special for me to have him in the car.

“He did a great job when I wasn’t there for my heat races and then getting the car dialed in so we could start last and make it up to the front for the win. It has to be one of the most memorable moments of the year, if not my racing career.

“Another memorable moment would be getting put into the wall pretty blatantly in a heat race and destroying the car. That’s one that I definitely won’t forget moving forward.” 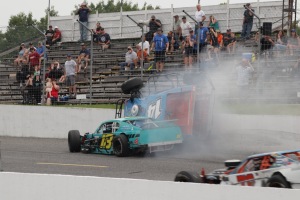 Returning back to Sunset Speedway two weeks later, the second heat event would not go according to plan. Battling for the runner-up spot in the early stages, Emms was pushed against the outside frontstretch wall, ultimately forcing him up on two wheels and stuck on the wall.

Despite the heavy damage to the car, the team did not give up in the face of adversity, making the necessary repairs – with help from others, to get the car back out for the feature. Starting from the tail of the field, Emms was able to make his way back through for a 10th-place finish.

“For me, I have such confidence in our team and the people that we have around us,” Emms commented. “I’m very thankful to have my dad working so hard on the car in terms of preparation. Ryan Ward, Peter Schotanus, Josh Lahay – everybody that puts in work to the car, I have confidence in them and know that they’re going to bring each and everything they can to the races every week and in doing so, it was great to see us rebound just to affirm some of those feelings.

“But definitely after the heat race woes at Sunset Speedway, I was incredibly proud of our team and all the people that came to help us out to get the car back together to get out on the race track. And with a green to checkered race, I thought it was very impressive to come from last even still with a bent-up racecar and finish 10th, especially with the field as stacked as it is.

“Like I said, I have a lot of confidence in the team and it was really positive to see the resiliency.” 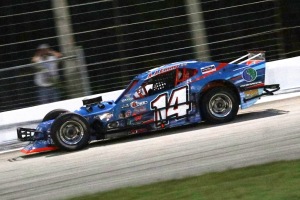 The middle four races of the season ultimately kept the roller coaster feel going, as there were some positives, as well as a couple lows. A fifth-place finish at Sauble Speedway and a third-place finish at Delaware Speedway were ultimately countered with a 20th at Sunset Speedway following contact on Lap 1, and eighth at Flamboro Speedway after getting stuck on the outside to start.

The year would end off on a good note, though, as Emms scored a heat victory before running inside the top-four all feature long at the Autumn Colours Classic en route to a third-place finish.

“It was good to end the year at Autumn Colours with a third-place finish, especially with how competitive the OSCAAR Modified division is and not only a field stacked with great drivers, but also a field full of great cars,” he commented. “That third-place finish will help carry momentum into next year, and confidence in running up front most of the race. Ultimately, hopefully like I said, moving forward, we can minimize our mistakes not only on my driving end, but on the mechanical end so we can continue to be fast next season.”

Looking back over the course of the season, Emms says it emphasized the importance of having everything together. While some weeks they were great handling-wise, you need to also have the rest of the package to go with that.

“Honestly, the division now is so tight; like, you really need to have a car that’s going to be able to do everything and handle at all different tracks, especially with how our invert works now,” he explained. “You have to have that whole package so you can pass cars and try to get closer to the front especially when there’s fast cars starting at the front. So it’s really getting back to crossing all of our Ts and dotting all of our Is, and not that we weren’t doing that before, but we also have to step it up a little bit just because the competition is also doing that.

“I think it also helps with having a lot of great names in the division now, like Brian MacDonald is at the track working on cars, and you see Hanleys working on the car. You see so many great people that have a lot of great knowledge in our garage area so that just tells us that we need to everything that we can to be there each and every week.”

By: Ashley McCubbin / AM Marketing – ashleymccubbin17@gmail.com.