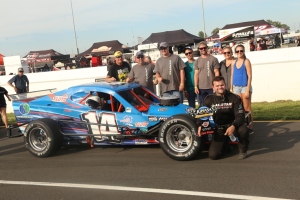 Starting up front in the feature, A.J. Emms kept himself in position to challenge for the win all race long en route to a runner-up finish.

The OSCAAR Modifieds would only run a single heat on Saturday afternoon at Jukasa Motor Speedway, which Emms made the most of with a runner-up performance.

Drawing the pole position for the feature, Emms would fall in line in second shortly after the drop of the green flag. While he was able to stick with eventual race winner Gary McLean throughout the event, and challenge for the top spot on a mid-race restart, it wasn’t meant to be and he’d cross the finish line in second.

“Gary is doing an awesome job each and every week,” Emms said. “They definitely been the class of the field not just this year, but for a very long time. We’re very fortunate to be up here with him. I’m pretty proud of my crew. The handling went away at the end, but we got something we can work on for next week and we’re definitely proud to be here. To get a second place finish, especially here at Jukasa Motor Speedway – it’s a historic place and it means a lot to run upfront here.”

The compliments were well received from fans and fellow competitors for Emms following the race, including those heard from McLean.

“It was a great battle,” McLean spoke of the battle for the lead. “You know, A.J. had to miss last week due to an injury, and he’s back at it. He’s fast. He’s fast every week. The kid can drive a racecar. A lot of fun. I’d wish we get more guys like that who can drive them.”

The OSCAAR Modifieds will be back in action at Jukasa Motor Speedway on June 23 alongside the OSCAAR Hot Rod Series and Ontario Outlaw Super Late Model Series. Event details are located at https://www.jukasamotorspeedway.com/.