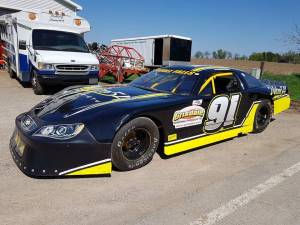 Starting at the tail of the field for the first feature, Emms was able to work his way forward into the top-10 by the mid-way point of the event, running as high as eighth. However, the countless caution laps did not play into his favor as he was forced to head pit side out of fuel before the race’s completion.

Special thanks to Mike Westwood Fabrication Motorsports, and their sponsors for the opportunity.

Emms will be back behind the wheel of his familiar No. 14 OSCAAR Modified this Friday, July 13 at Kawartha Speedway. In the two events that Emms has ran thus far in 2018, he has scored a pair of top-fives including a runner-up at Jukasa Motor Speedway.

The night looks to be busy with the modifieds being joined by the OSCAAR Hot Rod Series, Bone Stocks, and Canadian Legends Nationals. Everything kicks off at 6:30 pm with adult grandstand admission being $15.00 if you print or show the coupon the OSCAAR website.