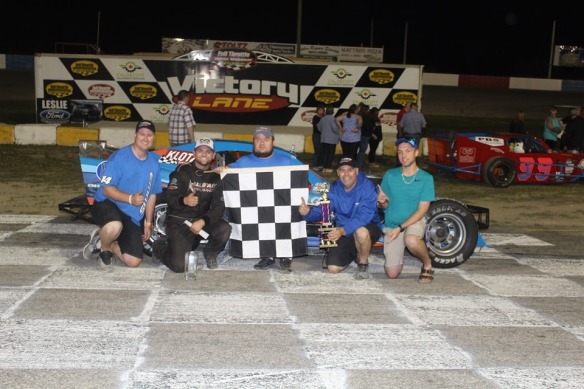 “It’s a huge deal for our entire team to be Rick Woolner Memorial Champions,” Emms said. “We really relied on our notes for this one and went back to what we knew. Not starting out the season the way we had hoped, this win is a big shot of confidence moving to Delaware this coming Friday.”

Emms was fast right from the beginning of the night, finishing second and first in his pair of heats to be the second highest qualifier on the night. The invert would see him start fourth, but he’d waste no time getting into the lead, doing so in the first six laps. From there on, he was on cruise control for the remaining 44 laps en route to victory lane.

“I personally never got the opportunity to race with Rick (Woolner), but have heard so many great things not only about his driving, but his character,” Emms added. “To win an event in his honour means a lot, and I consider it to be one of the biggest wins of my career.”

The victory also marks a confidence booster, adding to the early season success with a 10th and fifth in the first two Queenston Chevrolet Buick GMC OSCAAR Modified events of 2019.

“Our team needed a win like this,” Emms said. “We knew we could pull it off, but to actually do it is important for the whole group. Hopefully we can carry this momentum moving forward and try to click off more!”

While it is Emms’ first modified victory at Full Throttle Motor Speedway, he’s no stranger to success at the quarter-mile bullring, virtue of success in both midgets and pro 4 modifieds.

“I can’t pin point what it is about Full Throttle Speedway that I love so much but it is without a doubt one of my favourite tracks,” he commented. “I’ve always been fortunate to have good cars there which definitely helps. Full Throttle is one of those tracks you’ve really got to be up on the wheel; it’s full of character and with the right car is an awesome place to drive in my books.”

Fans can watch the full Rick Woolner Memorial on YouTube at https://www.youtube.com/watch?v=_DlATAEVZsA. Thanks to Ingrid Hartman for filming the racing action.

Emms and his Emms Racing Enterprises team will now shift their focus to Delaware Speedway, which will play host to the next OSCAAR Modified event on Friday, July 12. The past Autumn Colours Classic Champion has been successful on the half-mile, scoring three top-five’s in five starts, including a track-best third.

“Delaware is another track where we’ve had strong runs in the past,” Emms commented. “Our finishes haven’t always showed it, but we feel that this is one of our stronger tracks and are excited to unload and see what we’ve got!”

Press Release by Ashley McCubbin of AM Marketing