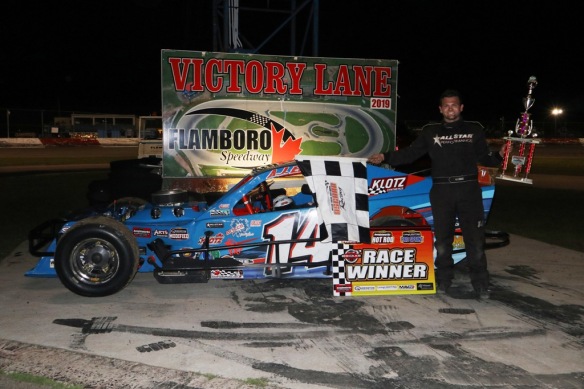 HAMILTON, Ontario — Despite a rough start to the afternoon, A.J. Emms was able to turn things around throughout the night at Flamboro Speedway, scoring the victory in the Queenston Chevrolet Buick GMC OSCAAR Modified feature.

As noted, it was a rough start to the afternoon as the No. 14 Modified would see limited practice laps prior to the start of the qualifying heats.

“We started out having some issues in practice with our carburetor,” Emms said. “Thankfully, Mike Westwood was there to give us a hand with getting that sorted out and detailed in. I also have to give a shout-out to Dale Reinhart for lending us a part to try and get the car going tonight.”

Despite missing practice, Emms showed speed during qualifying, with finishes of second and fourth in his pair of qualifying heats.

“In the first heat, we were strong, ran up in the front, but the 89c of Shawn Chenoweth had a lot of speed there as well so we finished up second to him,” Emms commented. “The second heat, we definitely got stuck in traffic and learned a lot about our racecar with not getting a lot of laps tonight.”

The re-draw worked in his favor, as he was able to start up front in the third position. It would not take him long to move forward, getting alongside Brad Pearsall for the lead on Lap 4 and taking the position a lap later. He was then able to put together 35 solid laps, and hold off Pearsall for the win despite getting caught up in lap traffic a little at the end.

“We were able to get into the lead early and just click off laps and the car was right dialed in,” he commented. “Thankfully we had really good notes dialed in for this track and it’s huge to win the Don Biederman Memorial.”

The third victory of the season for Emms Racing Enterprises, second of the OSCAAR campaign, allows him to extend his lead to 30 points in the series standings.

“We’re not trying to watch points, but just go out here and run the best that we can every week,” he commented. “Without a doubt, it’s a positive feeling as we’d rather be in front than chasing. We’re not sure what our plans are for the rest of the season; we’re just going one race at a time. But as of right now, things are going our way so we’re just going to ride the wave and take it one race at a time.”

The next race on the OSCAAR schedule is Saturday, August 3, at Peterborough Speedway. Emms has been successful there before, scoring his first career series victory in the Autumn Colours Classic in 2016.

“Peterborough is a special place to me,” he said. “I’ve always enjoy Peterborough as well. It’s a tricky track, it’s got a lot of speed there going down the back straightaway. I’m very excited to go there being a school teacher in Oakwood. We have some of my students coming to the track so I’m excited for that.

Press Release by Ashley McCubbin of AM Marketing