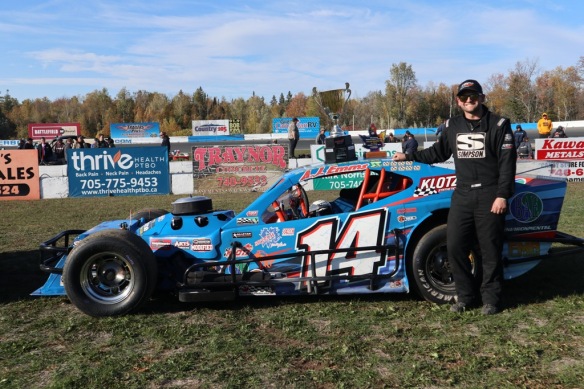 Emms started off the weekend by finishing fifth in his first qualifying heat on Friday night. He would miss his qualifier on Saturday as a result of having to attend a friend’s wedding.

With only a single heat credited, he would start 10th for the 50-lap feature, moving up to sixth in the early stages, remaining there until the first caution at Lap 20. Restarting on the outside of the third row, he moved up into fifth before avoiding an incident ahead of him on Lap 32 to move up into third.

Restarting on the second row, he would make his way up into second, with his sights set on the leader. Despite 15 laps remaining on the board, he was unable to close the gap between himself and eventual race winner Andy Kamrath, crossing the finish line with a second-place finish.

“I think Autumn Colours went really well overall,” he commented. “I think the 89 (Kamrath) car had a lot of speed; we wish that we would have been able to come up with a little but more speed, but I think overall, we had a strong car and strong finish. The car is in one piece going into the off-season.

“We went in there and did what we needed to do – and that was the plan all weekend. So we were able to accomplish our goal that way and follow through.”

By merely taking the green flag, Emms clinched the 2019 Queenston Chevrolet Buick GMC OSCAAR Modified Championship. It marks his first OSCAAR title following a pair of runner-ups in 2016 and 2017.

“It means a lot – not only to me, but my entire crew, and my family,” he said. “My dad, myself, Ryan, and Peter Schotanus have put in a ridiculous amount of work so many years to get in this position and I was just very fortunate to have those people around me and capitalize on the opportunity that was given to me. So I mean, for me, it’s a big deal.

“Being in racing my whole life, you see guys winning championships. One of my heroes as a kid was Tom Walters, and to see the amount of championships that he’s won, that’s something that I’d obviously strive to me and elevate myself to that level. So starting off with an OSCAAR Modified Championship and it’s a great way to cap off a year where we didn’t expect to have these things happen.”

The No. 14 Modified showed speed on a weekly basis, with Emms visiting victory lane on four occasions, including the Rick Woolner Memorial at Full Throttle Motor Speedway.

“The Rick Woolner Memorial was a big one for me,” he said. “Varney (Full Throttle) is one of my favourite race tracks. I know that was a major race for Gary McLean to win with being the 20th anniversary and Rick being so close to him. That was a big one for me to steal away from him, but also I thought it was a big one for Rick being such a good racecar driver and the amount of respect that I have for Gary McLean and Greg Gibson is very big. Although we’ve been fierce competitors in the past, I have a lot of respect for those guys. So for me to win that race, I realized how much that meant to them and in return, it means a lot to me.

“To also win the Don Biederman Memorial was a big one. Don Biederman is one of my heroes in racing. I wasn’t around to see him race that much, but you hear so many stories from other racers and how can you not have respect for someone like that? So those are two big ones that really stand out for me throughout this season.

“To top it all off with the championship, I couldn’t be much happier.”

Although he was able to score those wins along with seven heat victories, and nine top-five finishes, it did not simply come easy each weekend with growing competition level in the modifieds.

“Without a doubt, there were some new faces in the OSCAAR Modified division, but they were ones that were not new to racing and guys with range of experience, from hobby cars, thunder cars, to anything,” he commented. “We had a really deep field all year. Some guys to note – obviously the 16 car of (Anthony) DiBello was fast throughout the year; showed a lot of speed at a variety of tracks and was a consistent front runner. Jason Keen – same thing, was strong all year long with their new car.

“You also can’t count out guys like Luke Gignac who have won championships. Cory Horner and his brother were both very strong in that car – the 79h. John Harper started off the year as a force to reckon with and there are just so many more names to add the list. Anytime Gary McLean comes out, you know he will be fast. Between Shawn Chenoweth and Andy Kamrath driving the 89 car, that was a strong piece for both of them through the year. To add to the list, Dale Reinhart also had a very solid season with the times that he was out.

“I’m sure I’m forgetting some, as the field always definitely looked different at the front, but there was always a lot of competition up there. They kept us on our toes all year. We were fortunate to put ourselves in a position to have some solid finishes, and once we started breaking through with victories, they started coming quicker.”

Even with the heightened competition, the team was able to find success, something Emms credits back to the team and “a lot of hours in the shop” getting things ready.

“Nobody in our series runs on an unlimited budget so that means that everybody has to do lots of hard work,” he explained. “When you’re in an environment like that, I think the extra hours that you put in through the week really show on the race track. I think that’s why we had a lot of speed in our racecar.

“Having tons of knowledge that Peter Schotanus has and provides to our entire team is massive with the experience he has there. And my dad being a former Late Model driver, and thunder car driver for years when I was a kid, he has that experience of grinding through a season and knowing what it takes to win. So I think that having that experience and knowing what is required of us, and then going and putting in those hours throughout the week, doing our homework, watching other people and learning from them, and always striving to be better, I think that’s where we were able to capitalize this year.”

Even though they were successful, the team plans to continue pushing forward, knowing the challenge that lies ahead in 2020. Emms says the key will be fine tuning their equipment, based on the things that they learned near the end of this year.

“Some changes, or really clarifications as to what’s allowed, to our rule package have made it so that we have to go back and do some homework for us,” he commented. “So we need to look at the best way to move forward is for our entire program. We’re definitely going to go back and make sure everything is right on our racecar, and try to insure that we have all of our Is doted and our Ts crossed because that’s where things really come into play.

“Racing is not a game of miles; it’s a game of inches, so we’re going to do our best to find those inches that we have left to move forward. We will do that by going over the entire car and making sure everything is right, and doing what we know and taking information we learned and applying.”

By: Ashley McCubbin / AM Marketing – ashleymccubbin17@gmail.com