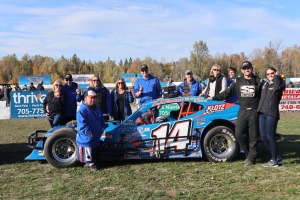 With consistency from the first green flag of the year at Sunset Speedway to the last checkered at Peterborough Speedway, A.J. Emms put together his best season yet en route to being crowned the 2019 Queenston Chevrolet Buick GMC, Scott Reinhart Trailer Sales Ltd OSCAAR Modified Champion.

“It means a lot – not only to me, but my entire crew, and my family,” he said. “My dad, myself, Ryan, and Peter Schotanus have put in a ridiculous amount of work so many years to get in this position and I was just very fortunate to have those people around me and capitalize on the opportunity that was given to me. So I mean, for me, it’s a big deal.

“Being in racing my whole life, you see guys winning championships. One of my heroes as a kid was Tom Walters, and to see the amount of championships that he’s won, that’s something that I’d obviously strive to me and elevate myself to that level. So starting off with an OSCAAR Modified Championship and it’s a great way to cap off a year where we didn’t expect to have these things happen.”

Emms started off his season on a high note, winning his opening qualifier at Sunset following a battle with fellow competitor Chad Strawn through the second half. He then backed up the performance by scoring a third-place finish in the second heat. Unfortunately, the Spring Velocity feature was rained out.

The No. 14 Modified was once again fast a couple weeks later at Jukasa Motor Speedway, as Emms scored another heat victory. Unfortunately, the team ran into handling issues in the feature, relegating them to a 10th-place finish. He rebounded at the end of June, making his way forward for a fifth in the final running order despite fading back a bit mid-feature.

Emms really began to hit his stride through the month of July, beginning with the series’ return to Delaware Speedway. He showed speed right off the trailer, winning his heat to qualify seventh for the feature. He’d steadily make his way forward once the green flag was flown for the main event, taking over the lead by the halfway mark. He would then stretch the lead out, before holding off the field on a late-race restart with eight laps to go.

The momentum carried into Sunset, as Emms won a qualifier and led the first half of the feature before fading back to third in the final running order. Although the team faced adversity with issues in practice a week later at Flamboro Speedway, the speed was there once again. He would take the lead on Lap 4 in the feature, threading his way through lap traffic en route to a dominating victory.

Emms started off the summer strong, showing speed in qualifying at Peterborough Speedway with a heat win, but was relegated to a seventh-place finish in the feature following a mid-race incident. He would rebound a couple weeks later at Delaware, battling inside the top-five all feature long en route to a third. He capped off the month of August on a high, taking the lead on Lap 11 at Flamboro and pacing the field the rest of the way en route to winning on the Don Biederman Memorial night.

“Don Biederman is one of my heroes in racing,” Emms commented. “I wasn’t around to see him race that much, but you hear so many stories from other racers and how can you not have respect for someone like that?”

The momentum carried back to Sunset, with a heat win and pacing the field for a couple of laps, before scoring a third-place finish in the first of the two 36-lap features. He was fast in the second half of the Iron Man 72 as well, once again leading some more laps and challenging for the lead throughout en route to a runner-up performance.

The podium finishes would continue a couple weeks later at Flamboro, as Emms ran inside the top-three all race long, challenging the leader on the series of restarts, ultimately scoring a runner-up finish. The final weekend of the year, the Autumn Colours Classic, would see the No. 14 Modified start from the 10th spot, cracking the top-five just past halfway. Emms continued to make moves through the second half of the 50-lap feature, crossing the finish line with a second.

Continuing to get stronger each season in the series, combined with consistency from start to finish, everything paid off for Emms and his team this season en route to their crowning moment.

On behalf of OSCAAR, congratulations on your championship this season, A.J. We look forward to seeing you back on-track in 2020.

Be sure to keep up with OSCAAR by staying tuned to the series website at http://www.oscaar.ca. Also, make sure to “like” the official OSCAAR Racing Facebook page, while following both the Twitter and Instagram accounts (@OSCAARRacing) to keep up to date on everything you need to know.